Letting the GINI out of the bottle: Income inequality in America 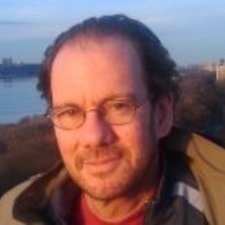 Imagine you’re talking to your colleague, who works at the same job at the same company. You both earn the same salary – say, $70,000 per year. In your group of two, the median income is $70,000. The average is $70,000. And the Gini coefficient – a measure of income inequality of a group – is zero, which means that you both are equal: You earn exactly the same amount.
Now imagine Carl Icahn walks into the room. According to Business Insider, Carl earned $7.4 billion in 2013.1 The median income – the middle value of what is now a group of three – is still $70,000. But the average is over $2.4 billion. And the Gini coefficient is very close to one, the highest value possible. A value of one indicates that a single person has all the money and the others have none.
That’s the idea behind the Gini coefficient, devised in 1912 by Italian sociologist Corrado Gini. In theory, it ranges from zero (perfect equality) to one (complete inequality). In the real world, it ranges from around 0.25-30 in the world’s most equal countries (think Scandinavia) to 0.60-65 in the most unequal ones (South Africa, Namibia and several island nations).2 Among US states, the range is narrower: from 0.42 (the most equal state, Hawaii) to 0.51 (the most unequal one, Connecticut).
To find the Gini coefficient on the DataUSA site, pick a location from the left menu – a state, county, metropolitan area or other geographical unit – and scroll down to "Income Distribution" in the economy section. For each of the 143,000 locations on the site, you’ll see the population broken into income buckets.3 Here’s one of the most equal states, South Dakota (which has a Gini of 0.436, well below the national average of 0.485).

View Data
Save Image
Add Data to Cart
Like South Dakota, every state has a big group of wage-earners on the left, making less than $100,000 a year. What drives the differences are spikes at the rich and poor ends – those making over $200,000 or under $10,000. States where there are large numbers of rich and poor have high Gini coefficients, even if most wage-earners are still in the middle.
For instance, Mississippi (right) has a high Gini coefficient because of large numbers of the very poor, as seen by the high values on the far left of the distribution – over 15% make less than $10,000 per year.

View Data
Save Image
Add Data to Cart
Meanwhile, California has a lower percentage of the very poor, but the big difference accounting for the higher Gini is the fact that a significant minority – about one person out of 40, or almost a million people in a state with a population of 39 million – makes more than $200,000 per year.

View Data
Save Image
Add Data to Cart
The scatterplot below, created with figures from the DataUSA site, plots the Gini of states (the horizontal axis) against the median income (the vertical axis). The states fall into four quadrants:
The colors show the percentage of state residents who live in cities, from 39% in Maine and Vermont to 100% (in Washington DC).4 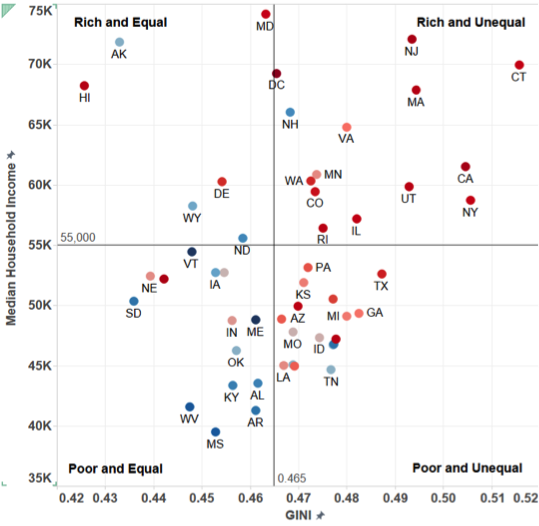 The scatter plot shows several facts:
To learn more about income inequality in America, go to the economics section of the profiles in DataUSA. You’ll find data from a variety of sources showing the rich, the poor and the middle class in your state or metropolitan area.

Dan Armstrong is a Senior Specialist at Deloitte focusing on analytics and data visualization. He previously worked for The Economist, Forbes and The Globecon Group, a boutique training firm that educates bankers in capital markets and derivatives.

He has a BA in anthropology and an MBA in finance and research methods. As recounted in Dreams of My Father, Dan was Barack Obama’s editor in the president’s first job out of college.